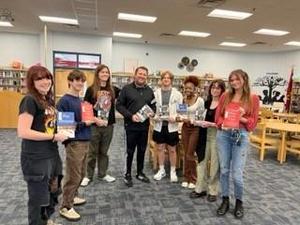 Mr. Steve Wilson recently published his third book, "In the Silent Halls". He has generously donated multiple copies of his books to our school library. They are available for check out now.

Most recently, he wrote “In the Silent Halls.”

The seniors pictured with Wilson (center) are in his Creative Writing class this semester. They were in his English class when he started writing the book in October 2021.

The book was posted on Amazon in July 2022 – a 10-month process of writing and editing.

“In the Silent Halls” gets its name from a poem by William Cullen Bryant called "Thanatopsis."

The idea came to Wilson when walking Harpeth's quiet halls when after-school duties were finished: What if a student had a master key to the school? From that thought sprang forth the story.

The setting is a small town called Royal Springs in the 1980s, a fictionalized Kingston Springs. South Cheatham folks will recognize a lot of things, though the characters are not based on any specific citizens.

There was a teacher at Wilson’s old school back in Columbus, Mississippi, who inspired Coach Gates in the book, but he suspects every high school has its own version of a "Coach Gates."

Wilson’s books are available to check out from the HHS library. They are also available for purchase on Amazon.

His first novel is “Pen Dreams,” which is set in Nashville, and his second one is “A Good Place to be From,” which is set mostly in Columbus and Oxford, Mississippi, along with a few other places in the state, and Bremerton, Washington. The descriptions for these books are posted on Amazon.